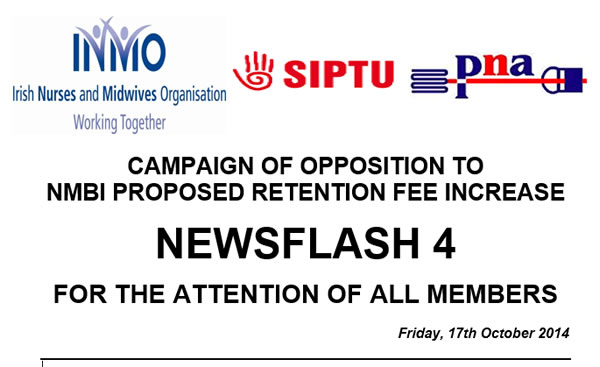 We refer again to the ongoing campaign seeking a reversal to the decision, by the Nursing and Midwifery Board of Ireland (NMBI), to raise the annual retention fee to €150.

In the context of a number of issues, and indeed comments that have been made in relation to this matter, we would now like to advise you of the following:

The three unions have, following the failure of NMBI to respond positively, sought direct discussions, with the Department of Health, on this issue immediately.

•  The purpose of these discussions will be to make clear, to the Department, that the Nursing and Midwifery professions are opposed to this increase and that serious workplace issues will emerge when nurses/midwives decline to pay the increased retention fee early in 2015.

•  This meeting will also provide us with a further opportunity to emphasise the following:

•  the lack of transparency, from NMBI, regarding current levels of expenditure i.e. public relations and legal costs;

•  the complete lack of support, from NMBI, to registered nurses/midwives in clinical practice; and

•  the professions have no confidence in the Board arising from its current approach which fails to support safe practice.

Members are reminded that the three unions will hold a public protest, at the head office of NMBI, to coincide with its board meeting in November.

In order to maximise participation in this protest members are asked to note the date (18 th November 2014 at 12.00 noon) and, where possible, begin making arrangements to attend on the day. For members outside of Dublin they should liaise with their local representatives/IRO to learn of what transport arrangements are being put in place to assist in participation.

It is acknowledged that other groups are holding hospital level protests, on this issue. This is fully understandable and highlights the anger, of tens of thousands of nurses and midwives, at this time. However it is imperative that the public protest, on 18 th November 2014, which coincides with the board meeting at NMBI headquarters, manifestly illustrates, through maximum participation, the anger of members and that this decision must be reversed.

The NMBI made this flawed decision and they must see the anger and frustration it has caused, by a large protest, on 18 th November 2014.

We would again reiterate our request, to all members, that if they have not already done so, to cancel their direct debit, with NMBI, and to sign up to our online petition while sending in a letter of protest (provided) to the President of NMBI.

These are immediate practical steps that members can take, at this time, which will convey to NMBI the anger of members on this matter.

This campaign will be shaped to maximise both participation and effectiveness.

This decision will only be reversed by every individual nurse/midwife following the advice given by the three unions. This will ensure collective action underpinned by collective strength. The frustration of everyone, with regard to NMBI, is equally shared and public protests will play a part in our campaign.

However, this issue will only be addressed by pressure upon NMBI, through both dialogue and a strong stance, when the fee increase is actually notified. This can be achieved by supporting the campaign organised by the unions who have negotiation rights.

The message, therefore, is this campaign is strong, consistent, will be maintained and will be shaped to respond to developments. In that regard please continue to monitor your emails and our website for ongoing updates.

SEE BELOW FOR MORE DOCUMENTS

There are no up-coming events